South Valley Peace Center (SVPC) was founded in the run-up to the Iraq war.  In the summer of 2002 the Visalia Friends Meeting launched a project to put a billboard on Hwy 99 saying Stop the War.  (The Iraq war had not yet started, but it was clear that the Bush administration was laying the groundwork to invade Iraq.)  To allow feedback and to communicate more information we needed a web page.  By this time the billboard project had drawn from a number of groups, so it was not purely a Quaker effort any more, and we didn’t want to use the Visalia Friends Meeting web site, so we registered the URL:  southvalleypeacecenter.org.

So the South Valley Peace Center started out as a web site. 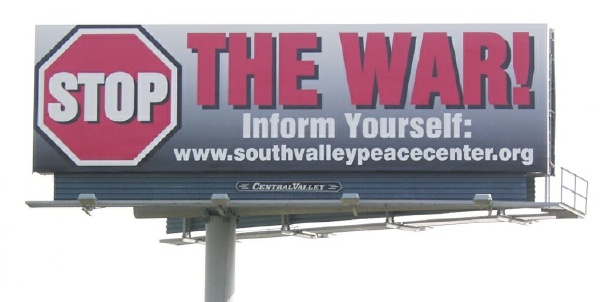 Our “Stop the War” billboard on Hwy 99 in the summer of 2002, designed to alert the community to the ongoing buildup to war.

During the same period of time a group of women representing WILPF started holding a vigil in Visalia on the corner of Mooney and Walnut.  Soon the numbers started to grow and become more diverse.  It soon became clear that the name without a group and the group without a name were a perfect match.  The South Valley Peace Center, as an actual organization, was born. 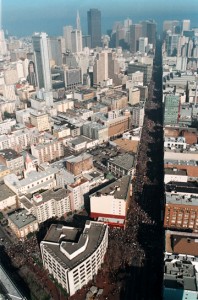 invasion of Iraq and continuing past the “Mission Accomplished” speech.  The vigils still continue on a monthly basis, and the SVPC has moved into other activities to encourage conscientiousness raising in the community.  We have sponsored Talk of the Town events, bringing important speakers to Visalia.  We have created a banner (which, unfortunately has continued to grow) depicting the number of US war dead in Iraq.  We have participated in events, such as the Peace Marches in San Francisco and the Rally in the Valley in Fresno.  We have also sponsored an annual Hiroshima Day event with thought provoking speeches, poems, and candle-lit paper lanterns floating in the lake.

If you are a person who recognizes the need to work for peace and you are looking for like-minded people in the communities of the South Central Valley, come join us.